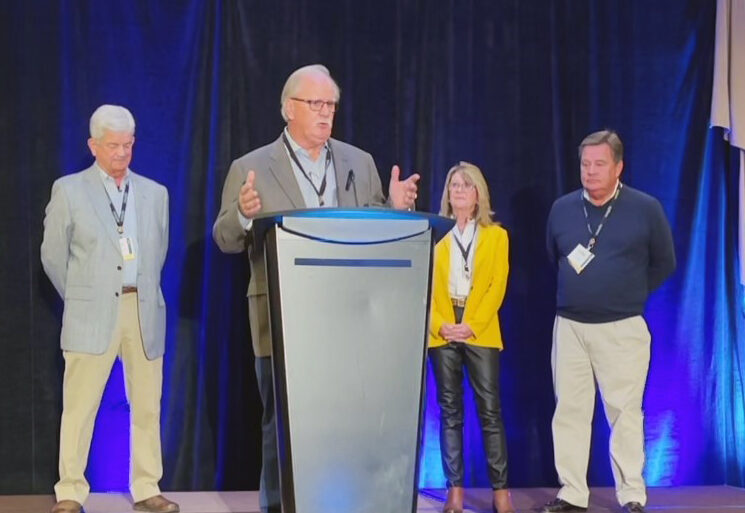 Robinson, who with wife Sandy also own Iron City Polaris with locations in Casa Grande and Phoenix, Arizona, has more than 40 years of experience in the agricultural equipment industry.

This is the 23rd year FWEDA has recognized the outstanding achievements of its Past Presidents. Recipients are active in the equipment industry for a minimum of 10 years at the time of the award and are recognized by peers for their contributions to the equipment industry. Robinson served on the Far West Board of Directors from 2007 to 2015 and was board president in 2013-2014.

“It is such a pleasure to be able to work with Tim and to call him a friend. Tim is continual learner and a natural teacher. He celebrates the success of others. He leads by example with his work ethic. His knowledge of the Ag industry is second to none,” said Chris Zaharis, Executive Vice President of Empire Southwest. “Tim engenders loyalty among employees and clients. He is a natural at building relationships and clients trust his advice. I love to see Tim’s passion for his work, family and hobbies. We are so fortunate that Tim joined our team over 10 years ago.”

“Tim’s defining life charge and the reason he’s receiving this award is found in a quote by Sir Winston Churchill: ‘We make a living by what we get, we make a life by what we give,’” said Clayton Camp, of Kern Machinery in Bakersfield, California, in presenting Robinson with the award.

Born in Latrobe, Pennsylvania — the birthplace of Arnold Palmer, Mr. Fred Rogers, Rolling Rock beer, professional football and the first banana split — Robinson grew up on the edge of a dairy farm, surrounded by woods and streams, spending as much time as possible outdoors as he does to this day. He proved his work ethic growing up, running two newspaper routes and working odd jobs milking cows, baling hay, mowing lawns, working in a machine shop and stocking shelves in his mother’s corner grocery store. As a teen-ager he cooked at restaurants, worked at a ski slope, pulled trap and skeet, and even drove a limousine.

Robinson moved to Casa Grande, Arizona, in 1977 to work in the copper mines before going to college, but the mines were closed so he ended up working as a cotton tromper where he learned about irrigated farming. He was offered a job doing equipment setup at OS Stapley Company. In 1981, Keith Equipment opened at a dining room table where Robinson was introduced to all aspects of the machinery business. He helped grow the business to a five-store operation over the next 19 years.

In 2000, AGCO offered his family an opportunity as an independent equipment dealer. The Robinsons opened Arizona Production & Machinery Supply with Sandy, son Jake and two employees as a Massey Ferguson and Hesston dealer in Casa Grande. By 2003 they acquired Southwest Tractor and a Polaris dealership. They opened a third location in Buckeye in 2006, and they acquired the assets of Hill Equipment in Las Cruces, N.M, and Fabens, Texas, in 2008.

Empire Southwest approached the Robinsons in 2010 to join their operations into one entity across the Southwest. Arizona Machinery Production & Supply converted to a Polaris dealership. Robinson manages Empire’s ag equipment locations in Arizona and Southern California.

The Robinsons have been married for nearly four decades. They have two children, daughter Alana who is married to Wayne Byrd, and son Jake. They have three grandchildren, Grayson and Ava (Alana’s children) and Cal Timothy (Jake’s Son).

In addition, owning Iron City Polaris, the Robinsons are a Whiteflyer distributer and own the O Bar O Ranch in Bonita, Arizona. Tim is also a pilot. His love for the outdoors keeps him out shooting, landscaping, flying, hunting, fishing, and reading. He’s a member of the NSCA, ASCA, NSSA, ASSA, ATA, ASTA, USA Shooting, FITASC, NRA, DU, Quail Forever, SCI, Pinal 40, and honorary squadron commander of the 56th Fighter Wing at Luke Air Force Base.